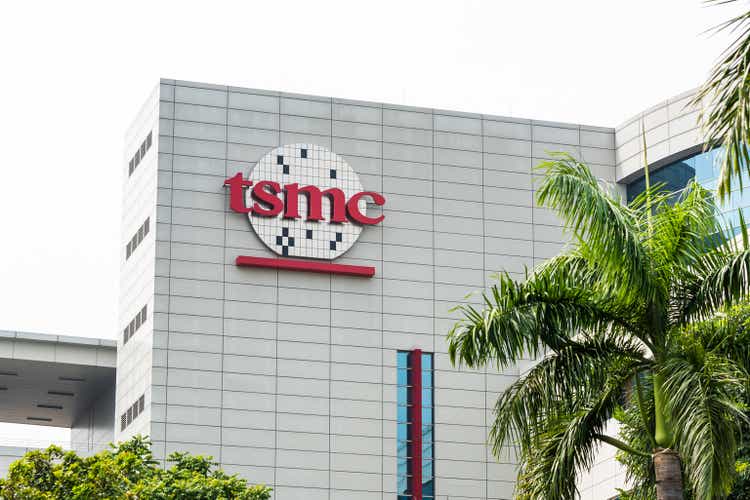 My thesis is that TSMC (NYSE:TSM) has a bright future given their advantages in the semiconductor industry. They have deep customer relationships along with the right size, focus and flexibility to satisfy requirements with capital intensity. In addition, they positioned themselves to focus on power efficiency before the mobile revolution.

Fabless by Daniel Nenni [@DanielNenni] and Paul McLellan [@paulmclellan] has a Foreword by TSMC Senior VP Cliff Hou in which the dynamics between foundries and fabless customers are explained. This environment allows TSMC to have deep relationships with their fabless customers who are willing to pay TSMC an attractive price. This is because the outsourcing of manufacturing allows fabless companies to focus on design and innovation.

Another laudable contribution by former chairman Chang is the blueprint for TSMC’s capex decisions. He repeated the considerations in the 2Q12 call saying they factor in their ability to continue as tech and manufacturing leaders while retaining the trust of customers and being profitable.

TSMC financials use New Taiwan dollars which go by the TWD code, the NT$ symbol and the NT abbreviation. At the time of this writing, 1 U.S. Dollar is a little under TWD 30.

Advantages of Focusing on Power Efficiency

TSMC’s 2021 annual report shows that power is saved as the line width shrinks:

A March 2022 post by Pushkar Ranade [@magicsilicon] explains the importance of foundries like TSMC having a focus on the reduction of power consumption:

Intel’s process technology was optimized over decades to enable the highest frequency CPUs and enabled Intel to dominate the PC wave of computing. On the other hand, foundry process technology was optimized to enable a highly power efficient and cost-effective SoC technology suitable for a wide range of customers over a large dynamic operating range, long before the advent of mobile computing. The foundries, led by TSMC were thus well prepared to cater to the needs of mobile, post-PC products.

The Fabless book mentioned above explains that in the early days, TSMC predominantly manufactured wafers for integrated device manufacturers (“IDMs”); these IDMs had their own fabs but they often didn’t have enough capacity on their own. Cadence (CDNS) was created in 1988 and they supplied design tools used by fabless companies but it took time for the industry to change such that fabless companies became meaningful. Eventually fabless companies like Qualcomm (QCOM) grew to become a huge part of the semiconductor industry. The relationship TSMC has with fabless customers is long and enduring per the 4Q07 call:

There is no question that if you look at the industry during the last year, the year before, you can see that the FAB-less industry, in particular, our partners, has grown robustly. They have outgrown the semiconductor industry consistently. And I’m happy to say, with also a very good growth margin. Many IDMs, as you also know, have gone FAB-lite, and are relying on foundry. And more IDMs are in the process of going FAB-lite, and are relying more and more on foundry services, too. As a result, we really believe that the foundry business model is strong, it’s dynamic, and it’s vibrant. It will be like that going forward for many, many more years.

Investors often think it is precarious when a business depends on a small number of key customers but TSMC doesn’t see it that way. In the 2Q17 call, then CFO Lora Ho notes that in 2016, the top 10 customers accounted for 69% of revenue. She remarks that the foundry business model makes it possible for strong relationships to be built with customers:

But I want to say that people may feel customer concentration is not a good thing. But we feel the other way. It’s not really a bad thing, because when you have a bigger customer, that means the dependency for them to TSMC as the customer and for us to then as the supplier needs to be stronger, the relationship collaboration needs to be stronger, which is in favor of a foundry business model. So we view that as a positive thing.

Samsung (OTC:SSNLF) used to manufacture a large number of chips for Apple (AAPL) but this relationship turned sour as Samsung was also competing with Apple by making phones. Today, Apple accounts for 26% of TSMC’s revenue and they are by far their most important customer. Based on 20-F filings, I put together a spreadsheet showing the percentage of net revenue accounted for by key customers from 2013 to 2021. Blank cells don’t mean zero; they just mean I haven’t seen enough data to be reasonably confident of the percentages. Huawei’s HiSilicon subsidiary designs chips and buys them from TSMC; we use the parent name Huawei instead of HiSilicon below:

The chances of Apple moving a large part of their business away from TSMC in the near future are low. Lawsuits and other problems plagued their relationship with Samsung such that bridges were burned. And Intel (INTC) isn’t an option with 7nm and 5nm resolutions right now.

TSMC is able to invest heavily in capex in a way that doesn’t stop their dividends from rising prodigiously over long periods of time. As long as TSMC keeps expanding, there will always be heavy capex for upcoming nodes as they invest in capacity for future growth. Today, those investments are for N3 and N2. In the 2Q12 call, former chairman Chang said capex as a percentage of revenue was mostly above 60% in the 6 year period from 1997 to 2002. Former chairman Chang goes on to show that these investments were part of the reason why their revenue had a 10-year CAGR of 20% and their market share increased:

Capex as a percentage of revenue was 35% or lower from 2015 to 2018. The 2Q16 call mentioned that minimizing the conversion loss between adjacent nodes is a factor in this regard:

In the 2Q17 call, CEO C. C. Wei said the following with respect to repurposing:

Well, on the EUV, I think there is more than 90% of 7-nanometers equipment from 10-nanometer.

In the March 2022 post mentioned earlier, Pushkar Ranade goes on to explain the way in which TSMC gets the most out of their capex investments:

Led by Apple and the iPhone, mobile computing provided TSMC with opportunities to increase wafer volumes at all nodes including legacy nodes (e.g., 40nm and older) and advanced nodes (16nm and newer). The legacy node wafer business allowed TSMC to run large volumes at full capacity and high margins on fully depreciated toolsets. The advanced node, high volume, and quick ramp products like Apple iPhone SoCs were critical in helping TSMC debug and stabilize yields on the most complex, advanced geometry process nodes, thereby quickly improving manufacturability and paving the way for the second wave of advanced node customers (e.g., NVIDIA and AMD). Without the massive volumes from Apple, it is unlikely that TSMC would have been able to catch up to Intel on advanced node semiconductor manufacturing.

As for the annual level, the 2021 20-F shows wafer revenue broken down by resolution and we again see the way in which capex investments have made TSMC dominant with the 5nm and 7nm resolutions:

Arguably, Samsung is the only company in the world that has the size and advanced technology node expertise to make the same types of capex investments as TSMC. However, Samsung doesn’t have the same focus as they aren’t a pure-play foundry. In some ways, the capex requirements here remind me of the capex needs in the hyperscale cloud space where only AWS (AMZN), Microsoft Azure (MSFT) and Google (GOOG) (GOOGL) are relevant on a global basis outside of China.

In terms of risk, the elephant in the room is the future between China and Taiwan. It is a major concern, but the way in which it impacts our valuation numbers is highly subjective. These political considerations can be abstruse; it’s hard to quantify them but I’m an optimist in this regard.

Trailing-twelve-month (“TTM”) net income is TWD 656.1 billion or 1Q22 + FY21 – 1Q21 or TWD 202.9 billion + TWD 592.9 billion – TWD 139.7 billion. Unadjusted TTM FCF is TWD 403 billion or TWD 110 billion + TWD 273 billion + TWD 20 billion. If we differentiate between growth capex and maintenance capex such that we only deduct the growth capex, then the adjusted FCF number is closer to the net income number. Back in the 3Q05 call, Calypso Capital Analyst Matt Gable asked about the maintenance capex level and CFO Lora Ho answered that it was roughly 10% of the total yearly capex at that time. I don’t know exactly how much of today’s capex is for treading water vs growing but a large part of it is growth. As such, I think accrual net income can be a better indicator of steady-state earning power than unadjusted FCF.

In the 4Q21 call, CEO C. C. Wei said 2022 growth will be fueled by advance technology from the smartphone, HPC, IoT, and automotive platforms:

For the full year of 2022, we forecast the overall semiconductor market excluding memory, to grow approximately 9% while foundry industry growth is forecast to be close to 20%. For TSMC, we are confident we can outperform the foundry revenue growth and grow between mid- to high 20s percent in 2022 in U.S. dollar terms.

Later in the 4Q21 call, CEO Wei said the long-term revenue CAGR will be between 15% and 20% over the next several years. For the 1Q22 quarter, the HPC platform was 41% of revenue and the Smartphone platform was 40% per the 1Q22 call. CEO C. C. Wei said HPC is one of the reasons why the actual numbers for the full year should come in at or above the high end of guidance:

Randy, we expect our HPC platform to be TSMC’s strongest growing platform this year and the following years. And it will be the largest contributor to our growth. And this is all because of a structural megatrend driving increasing need for greater computation power and energy-efficient computing. As I said, these kind of technologies happen to be TSMC’s strong point. So that all I can share with you is that we have confidence that it will be exceed or at the high end of our guidance.

One can visualize capex as the difference between the cash from operations and FCF lines above. Depreciation and amortization are more tricky as they’re not the only things between net income and cash flow from operations above; changes in working capital can complicate things in this area. I like to look at them in this table to see how they hit the income statement which is mainly in the cost of revenue line. Depreciation was 61%, 64% and 49% of capex for 2019, 2020 and 2021, respectively:

Looking at the 2019 to 2021 period, the accrual income statement numbers like top line revenue, gross profit and net income have gone up prodigiously. Regarding the cash flow statement, cash flow from operations has also gone up nicely but FCF has been more subdued as capex as a percentage of revenue has risen.

Within 5 years, I won’t be surprised if the annual dividends go from today’s level of USD 9.6 billion to USD 20 billion or more. It’s hard to say what they’ll do from there and how long TSMC will have substantial earning power but I wouldn’t argue with investors who say TSMC is worth a range of USD 500 billion to USD 600 billion.

The 2021 20-F shows 25,930,380,458 shares outstanding as of December 31st and it says that one ADS represents five common shares. As such, the market cap is $486 billion based on the May 24th ADR price of $93.77. The enterprise value is a little below the market cap given the biggest parts of the 2021 20-F balance sheet numbers which are the USD 38.4 billion cash and equivalents and the USD 22 billion long-term debt which is a partial offset.

Seeing as the market cap is under a plausible valuation range, I don’t think the stock is significantly overvalued.