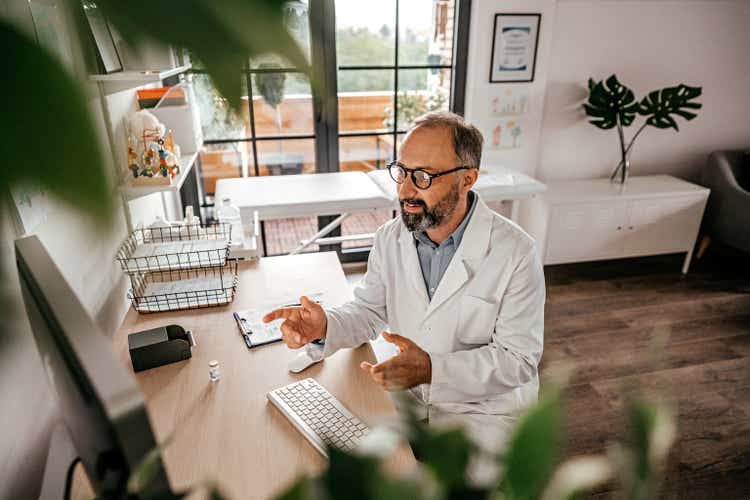 Hims & Hers Health (NYSE:HIMS) is a telehealth company which focuses on providing high-quality and easy access healthcare, primarily for stigmatized disorders. The company’s target demographics are millennials and Gen Z. The company is in its fifth year of operation and went public via SPAC in 2021. Since then, the share price has fallen from $25 to around $5 today, which represents an 80% decline.

There are a few aggregate-based explanations for why Hims has fallen:

My rebuttal to the three reasons is as follows:

I often hear investors complain Hims has no moat and thus will get gobbled up by larger competitors such as CVS (CVS) or Amazon (AMZN). What critics do not understand is moat comes second – the value proposition comes first. Investors who ask where is the moat are putting the “cart before the horse.”

One can claim any company had no moat at first. What moat did NIKE (NKE) have at first? Anyone could create an athletic clothing brand. After all, adidas (OTCQX:ADDYY, OTCQX:ADDDF) had a fifteen-year head start on Nike. I am sure skeptic investors at the time said Nike has no moat and Adidas can out-compete them.

The value proposition is what matters. If Hims provides patients with high quality and convenient healthcare at the lowest price, it will produce a profit. As it produces a profit, the company will expand its capabilities and infrastructure while becoming more efficient. This is what people refer to when they mention ‘moat’ – it is the competitive advantages a business possesses that are derived by its capabilities, infrastructure, and efficiencies. In other words, value proposition creates the moat. It is illogical and non-chronological for a moat to create value.

One of the keys to Hims’ value proposition and moat is the company’s ability to vertically integrate. Management has demonstrated they recognize this key and are progressing towards this goal.

The company’s primary touchpoint is its new mobile app, which allows patients to get a medical consultation directly from the app within a few taps. These consultations have grown at a CAGR of almost 130% from 2018-2021.

Branded Products and Fulfillment Centers to Ship Them

The company makes a large chunk of sales off its own brand name products and custom formularies rather than solely relying on third-party drug manufacturers. The company has two internal fulfillment centers, one in Ohio and one in Arizona, which fill over 50% of orders.

Although these are beginner steps toward vertical integration, it demonstrates the company is heading in the right directions and understands the importance of this strategy.

I believe the company is worth $18.20 per share, which represents more than threefold increase from current levels.

From the graph above, we can see the company has increased revenue by 16.6% CAGR per quarter from Q1 2019 to Q1 2022. This was achieved without the main catalyst of the mobile app, not to mention the absence of thousands of new retail touchpoints.

Simply extrapolating each quarter this year at a 16.6% growth rate leaves us with these forecasts:

Adding up my forecasted revenue equals $516MM. I think the extra “umph” to get to $544MM will come from the mobile app; I think investors are severely underestimating the revenue-generating power of the app.

Before I dive into the specifics, I want to point out valuation is an art, not a science. Two investors separately analyzing the same stock will almost certainly come up with two different valuations.

Cost of goods sold and gross margins are flip sides of the same coin. Hims’ gross margin for 2021 was 75%. For 2022, I predict a 73% gross margin rate. From there, I gradually lowered it over the following years. Hims has expanded into numerous retail channels (Amazon, CVS, Walmart (WMT), etc.) and sales from those channels carry lower margins. Therefore, it is wise to factor this in the forecast.

The company’s SGA expense as a percentage of sales was 117% in 2021. I assumed this would stay the same in 2022 and then would gradually get better since overall sales would outpace the spending at this level.

I kept the tax rate the same, flipped net current assets from negative to positive over time, and rapidly increased the company’s CAPX to account for its increased need for infrastructure as the company grows.

The WACC was calculated to be 11.71% using the CAPM model. The terminal growth rate is set to 2% to be conservative.

I predict future cash flows to summate to $3.52B in present value dollars. Dividing each dollar by the current shares outstanding yields a share price of $18.20.

The extreme bear case is the company never becomes profitable and slowly reverts to its cash position, which at the moment is $1 per share. The cash position acts as a temporary floor on a share price. However, the cash position is dynamic and subject to change, so the floor would ultimately be $0 per share if the company keeps losing money.

The extreme bull case is the company becomes profitable soon and the market begins assigning growth multiples to the stock. Attached to a PE of 20-40, the stock could become a 10-bagger or higher from current levels.

To be conservative, I would put both of these outcomes out of your mind for the time being (easier said than done). Although, I will say that I believe the latter to be far more likely than the former. I absolutely see potential for this stock to be a 10-20 bagger (in the distant future).

Buying shares of Hims carries numerous risks. A few of which are as follows, although incomplete:

An investment in Hims offers investors the opportunity to get in on the ground floor of potentially one of the most industry-disrupting companies. Healthcare is seemingly one of the last sectors to be revolutionized by technology. Hims is at the forefront of that trend and is showing solid signs of being profitable sooner rather than later. The company continues to execute, expand, acquire new customers and vertically integrate. I believe the fair share price is around $18, which offers potential for 2-3x return on your money. Investors who understand the risks should consider researching Hims further.