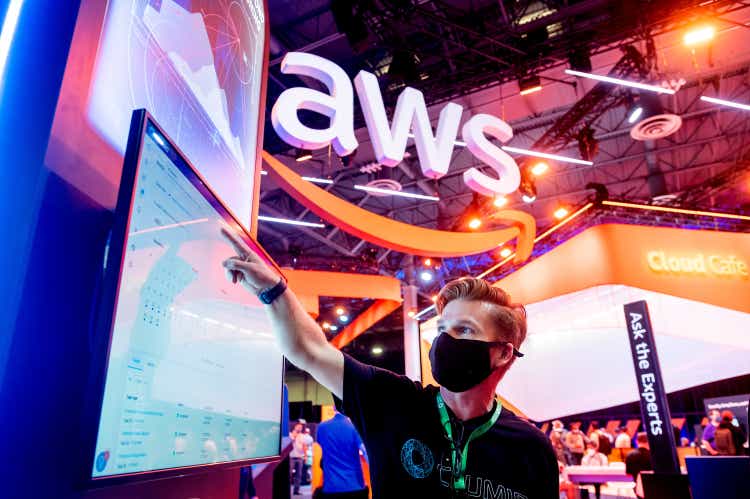 Amazon: AWS Is Brilliant, Everything Else Is Pretty Good,

I have always watched Amazon.com, Inc. (NASDAQ:AMZN) from the sidelines, but I couldn’t help but dig more into its AWS division. After researching it further, I believe that AWS should be the cornerstone of any investment thesis in Amazon right now: it is industry-leading, boasts impressive margins, is the fastest growing segment of Amazon, and, oh, the new CEO started up the AWS division back in 2006.

All this points to AWS becoming the main story for Amazon investors over the upcoming decade, and I think it’s pretty clear why.

Amazon is a global player in, well, a lot of different things. The company is best known for its ecommerce marketplace and logistics network, and in particular the Amazon Prime subscription which gives members access to next-day (or even same-day) delivery, access to the Prime Video streaming service, and other benefits depending on your region.

But Amazon is so much more than just its marketplace; in fact, the below graphic quite accurately states that Amazon is at war with everyone.

The company has one of the broadest offerings out there, and has a presence in a multitude of different industries, including video game streaming, music, wallets & payments, smart speakers, and many, many more. In truth, all of these offerings can make Amazon a difficult business to analyze in terms of a potential investment, so my approach is this – assume that the smaller parts of the business are potential future opportunities, but focus on the core offerings that have been successful.

Launched in 2006, AWS is Amazon’s industry-leading cloud storage offering. It powers hundreds of thousands of businesses in 190 countries across the globe, with cloud-based solutions that include application hosting, website hosting, enterprise IT application hosting, backup and storage, content delivery, and database solutions – AWS does it all. It has also been Amazon’s fastest growing operating segment over the past 5 years, and now makes up 15% of Amazon’s revenue. In fact, the only year it wasn’t the fastest growing segment was in 2020, when everyone was shopping for everything on Amazon due to lockdowns.

So, let’s dive into why AWS should be the backbone of any investment thesis for Amazon.

The Power of AWS

As I mentioned, AWS was formed way back in 2006 when cloud computing was in its infancy. Honestly, I’m not too sure what compelled this e-commerce company to think “you know what would be cool? Cloud hosting,” but I’m sure they’re glad they did. This has been led since inception by now-CEO Andy Jassy; for me, this is a sign of the future direction of Amazon’s business and the increased importance of AWS.

To underscore exactly how much of an impact the growth of AWS should have on Amazon’s overall financial performance, I’ll use a couple of charts. First, let’s take a look at how much of Amazon’s revenue is driven by AWS.

Over the past 5 years, AWS has grown from 10% of total revenue to 15% – impressive, but still “only” 15%. Yet bear in mind that Amazon makes the majority of its sales from the low margin, high volume ecommerce side of the business. And those margins matter – it’s all well and good having a load of sales, but it’s less appealing if the margins you make on those sales are mediocre. If we take a look at the EBIT margins over the past 5 years, it’s clear to see why AWS should excite investors.

We can see the nature of Amazon’s ecommerce + other services business playing out in these margins, with each individual segment making negligible EBIT margins. This isn’t necessarily a problem when a segment brings in over $100 billion in annual revenue, and it is just the nature of the business, so I’m not knocking the non-AWS segments.

Although if you do take a look at AWS, we see margins that are not only so substantially higher, but margins that have also expanded from 25% to 30% in the past 5 years.

Clearly, AWS has been driving Amazon’s overall EBIT higher over the past 5 years, despite making up such a small share of overall revenue. In 2021 alone, AWS contributed to ~75% of EBIT compared to the other operating segments, despite making up just 15% of revenue!

Why is this so exciting? Because AWS is not only Amazon’s most profitable operating segment, but it is also the fastest growing – if it can generate 75% of Amazon’s EBIT from 15% of overall revenue, imagine the impact it could have if it grew to 20%, 25%, or even 30% of total sales.

Plus, the broader market is continuing to grow at a rapid rate. According to Emergen Research, the Global Cloud Infrastructure market is expected to grow at a 11.8% CAGR from 2021 through to 2030.

With every business, I look to see if there are any durable competitive advantages (aka economic moats) that will help the company continue to thrive whilst protecting itself from competition. When it comes to AWS, I believe it has been set up in such a way that it will continue to excel.

First and foremost, AWS has a powerful moat thanks to a combination of its first mover advantage and its scale – the former feeds the latter. When it comes to cloud providers, scale is everything in terms of bottom-line profits. Amazon’s early move into this industry has enabled it to benefit from a much larger scale, and as a result each additional AWS customer would cost incrementally less; we’ve seen this through the AWS EBIT margin expansion. As can be seen below, Amazon is dominant in this industry.

There is something else that comes with such dominance, and that is switching costs. Once a company has been set up on a certain cloud provider, they are likely to find switching away very difficult, particularly if there are additional services offered by that cloud provider that a company is taking up. For example, AWS has over 200 different products from machine learning and robotics to analytics and augmented reality. It is difficult to overstate exactly how embedded AWS gets within a business – remember it offers hosting for websites, applications, storage management, and more – can you imagine switching all that to a different provider?

So perhaps the question is more surrounding whether or not Amazon can attract customers to lock into these high switching costs, and I have no doubt on their ability here. Not only do they benefit from a low-cost advantage over their competitors due to scale, and so could compete aggressively on price if they wish, but according to the 2021 Gartner Magic Quadrant for Cloud Infrastructure and Platform Services, AWS is the clear leader. In short, there is reason to believe that they can continue to land more customers & expand spend through additional solutions.

There are additional weaker moats that I won’t get into. You could definitely give AWS a moat for its brand (but then again, its competitors Alphabet (GOOG, GOOGL) and Microsoft (MSFT) both have strong brands, too), and you could also give it credit for a network effect due to the AI offerings across multiple customers – but I won’t, just because I don’t think it is key to the thesis nor are these particularly strong right now.

Is Amazon Worth The Price?

As with all high growth, innovative companies, valuation is tough. I believe that my approach will give me an idea about whether Amazon is insanely overvalued or undervalued, but valuation is the final thing I look at – the quality of the business itself is far more important in the long run.

I have assumed a substantial revenue slowdown in 2022 driven by multiple factors, including macroeconomic headwinds reducing consumer spending and difficult comparisons vs a lockdown-boosted 2021. Throughout the entire period, I expect spending on AWS to remain robust, yet it does still only make up 15% of revenue & cannot fully counteract the slowdown in other areas of the business. I have also assumed a reduction in EBIT margins driven by the lower non-AWS sales resulting in fewer scale benefits, as well as the impact of inflation across Amazon’s supply chain.

I have, however, assumed that EBIT margins will increase substantially over the forecast period, with EBIT growing at a 31% CAGR and greatly outpacing the 13% CAGR for revenue growth. If you hadn’t guessed already, this is because I think AWS will become a larger share of total revenue and that will translate into substantially higher EBIT margin. Given this, my assumptions may actually be conservative – but I’d always prefer to be more cautious than optimistic.

If I look at the EV / EBIT multiples, I believe a gradual contraction down to 21x is appropriate for a company of Amazon’s profile and growth rates. Note that if AWS grows faster than I have forecast, then Amazon may warrant a higher EV / EBIT multiple – this is why I include a low, mid, and high range for these multiples.

Put that all together, and I can see Amazon shares achieving a 13% CAGR through to 2026 in my mid-range scenario.

I think the recession risk to the non-AWS side of Amazon’s business is quite clear, as well as the inflationary pressures. There is no doubt that a fall in consumer spending will hurt Amazon, yet I think the company will be able to cope. I think AWS itself is pretty recession resistant, as businesses will still need to utilize their cloud infrastructure – it’s not an easy cost to cut back on.

For me, the main risk for AWS relates to its competition, particularly Google Cloud and Microsoft Azure. These are two big players in the industry, both of whom are investing a lot of money into building out their own cloud infrastructure offering. Plus, they all offer some differentiated tools, for example Google Cloud is known for its excellence in AI and analytics. For me, the biggest risk to Amazon is AWS being usurped by one of these challengers as the leader in the Cloud Infrastructure and Platform Services industry. Investors can keep an eye on independent research such as Gartner’s Magic Quadrant in order to check whether or not the competition is catching up.

My personal thesis for investing in Amazon would revolve around three core components:

I believe that this makes up the backbone of a good investing thesis in Amazon right now. At its current price, I think this company is looking like an attractive opportunity.